Sometimes you don’t even notice how the time flies. Summer turns to Winter and then, in the blink of an eye,  Spring’s first blossoms arrive.

Throwing ourselves in the deep end

Over a year has passed since we first arrived at Finca Vegana with our camper Helmut. A year full of ups and downs, full of tears and laughter, full of joy and worry. It’s not every day that you take over a finca with three hectares of land, five holiday homes, a pool and a villa – especially in a foreign country. It was from day one apparent that there would be one or two seemingly impossible problems to solve. But we could only guess what the Finca actually had in store for us.

Many of the people closest to us strongly advised us not to make such a spontaneous decision. But behind the big iron gate we saw our dream and a tonne of potential. It simply felt right. Now, a year into the adventure, we are often asked the question if we regret our decision or if we would do it all over again.

We have experienced a lot in this past year. We had an incredibly beautiful and hot summer with many memorable moments and encounters – and a LOT of work! A pool, for example, is much more difficult to maintain than you might think! A combination of the heat and a lack of experience meant the water went from crystal clear to dark green –  in a matter of days and while we were fully booked. Then the car broke down, the dishwasher gave up and the kitchen flooded. Searching for the source of the water, we used the trusty iPhone flashlight, it fell from the counter and landed face down, shattering the screen – all of this  in just one day. So yes, at this point you do start to wonder if you might be in over your head…

Autumn brought it’s own challenges: the water heater broke down and the showers ran cold. Fortunately, a plumber friend had the time and was able to administer the repairs within a half a day. The list of repairs grew and grew. Some were large and some small, but at times we were driven to despair. Our landlord wanted nothing to do with it, we are responsible for all repairs. Our only choice was to plug holes, patch breaks and mend what we could, because of course, giving up was not an option.

By Winter, we were exhausted. December was surprisingly busy with house guests and also some campers, but then as if overnight, the low-season. In January, February and March we had a handful of bookings and made huge losses every month. It was cold and uncomfortable but the work still piled up. We planned the coming year, established new relationships, started long-planned projects and expanded our cooking knowledge. Wood had to be chopped, leaking windows repaired and we needed to keep our feet warm.

On top of that, Josie, our Border Collie and unplanned (but heartily welcomed) addition to the family,  needed a lot of attention and training. We were often knocked out with colds and viruses and didn’t know how to handle the stress. We had some less-than-optimal relationships on the Finca which were draining us of our strength. In April, we reached boiling point and the reality of what we had taken on came crashing down around us.

If we were to continue to live and work here, we had to make some fundamental changes. There had to be clear cut rules and boundaries in order to allow for more family time. There was no way it could continue as it had until then, our batteries were empty. Make a plan and take action. Over the past few months we introduced boundaries which allowed for more separation between our business lives and private lives. Those friends and helpers who were with us last year and who pleaded with us to do so can now smile, because they were right. We allowed fear to dictate our lives, fear of handicapping our business, fear of losing bookings, fear of unsatisfied helpers, and we hesitated for a long time. It’s hard to believe, but so far these changes have not led to a single complaint, quite the opposite. Our guests and helpers respect and acknowledge the hard work we pour into the Finca every day and have supported us through this transition.

So now, we do as the Spanish do and have a Siesta time in the afternoon. We don’t start work until 10am and are able to have breakfast every day as a family, uninterrupted. It’s almost been relaxing! We make time for sport and leisure so that we can recharge our batteries and be more efficient. Because as everyone warned us, the combination of uprooting your life to start fresh, building a business, taking care of a relationship and nursing our personal health is not without its hurdles. In addition, being a parent, learning a foreign language and trying to find time for ourselves can be overwhelming 😉

We will never know if it was a coincidence or fate. But one thing we know for sure: everything is exactly as it should be. We were in the right place at the right time and we were ready for this challenge. 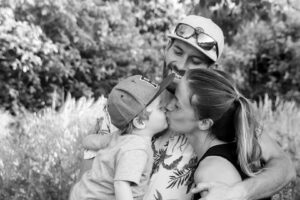 Finca Life has countless beautiful aspects. We live in paradise, surrounded by nature and mountains – exactly what we always dreamed of. We have space to host our friends and family located all over the world and wow them with our homemade food. We’ve also learned so much about ourselves and what we want from our lives, what we want for our son. Minimalism, sustainability, veganism – all things which have become so important to us and we are on an ongoing learning journey. We are thankful for every day which we can spend in this beautiful place. The magical encounters, the in-depth discussions and of course the life experience that we gather here are priceless. We truly look forward to the coming year and the challenges it will surely bring. Thank you to everyone who believed in us and everyone who has supported us on our way. See you in paradise!

We stayed at Finca Vegana for two nights and it was so fantastic, we extended our stay. The place is super clean with all the rustic charm and the hosts Nina and James are so welcoming and a whole lot of fun. Could not recommend this place highly enough. Highlight of our Spain holiday.